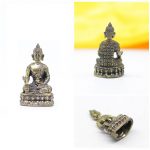 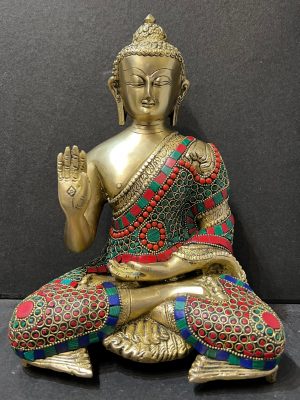 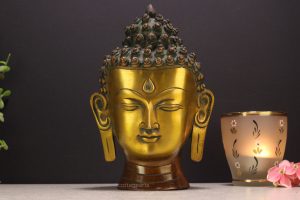 HAND CARVED – These statues are 100% hand carved, with a retro style and exquisite details, small and delicate, perfect for collections as home decoration.
POCKET-SIZED – Measures 3 inches tall, 1.75 inches wide, and 1.25 inches long. Fits any corner on desk, car, or terrarium.
PERFECT PRESENT – Packed in beautiful gift-box ready for any occasion. Ideal for Buddhist friends or relatives.
DOUBLES AS DECOR – Also serves as a physical reminder to practice mindfulness and focused breathing – to bring more awareness, compassion, and wisdom into one’s life.

❤ DESCRIPTION
Tibetan Buddhism (also Indo-Tibetan Buddhism) is the form of Buddhism named after the lands of Tibet where it is the dominant religion. It is also found in the regions surrounding the Himalayas (such as Bhutan, Ladakh, and Sikkim), much of Chinese Central Asia, the Southern Siberian regions such as Tuva, as well as in Mongolia.

Tibetan Buddhism is a form of Mahayana Buddhism stemming from the latest stages of Indian Buddhism (and so is also part of the tantric Vajrayana tradition). It thus preserves “the Tantric status quo of eighth-century India.”

Apart from classical Mahayana Buddhist practices like the six perfections, Tibetan Buddhism also includes Tantric practices, such as deity yoga and the Six Dharmas of Naropa. Its main goal is Buddhahood or rainbow body.

❤ AMITAYUS — also known as Amida or Amitāyus, is a celestial buddha according to the scriptures of Mahayana Buddhism. In Vajrayana Buddhism, Amitābha is known for his longevity attribute, magnetising red fire element, the aggregate of discernment, pure perception and the deep awareness of emptiness of phenomena.

❤ AVALOKITESVARA or PADMAPANI — a bodhisattva who embodies the compassion of all Buddhas. This bodhisattva is variably depicted, described and portrayed in different cultures as either male or female.

❤ BHAISAJYA — the Buddha of healing and medicine in Mahāyāna Buddhism. Commonly referred to as the “Medicine Buddha”, he is described as a doctor who cures dukkha (suffering) using the medicine of his teachings.

❤ MANJUSRI — a bodhisattva associated with praja (insight) in Mahayana Buddhism. In Tibetan Buddhism, he is also a yidam. His name means “Gentle Glory” in Sanskrit.

❤ PADMASAMBHAVA (lit. “Lotus-Born”)– also known as Guru Rinpoche, was an 8th-century Buddhist master from the Indian subcontinent. He is widely venerated as a “second Buddha” by adherents of Tibetan Buddhism in Tibet, Nepal, Bhutan, the Himalayan states of India, and elsewhere.

❤ SARASWATI — the Hindu goddess of knowledge, music, art, wisdom, and learning.[She is a part of the trinity (Tridevi) of Saraswati, Lakshmi, and Parvati.

❤ VAJRAPANI (Sanskrit: “Vajra in [his] hand”) — one of the earliest-appearing bodhisattvas in Mahayana Buddhism. He is the protector and guide of Gautama Buddha and rose to symbolize the Buddha’s power.

❤ JAMBHALA — the God of Wealth and appropriately a member of the Jewel Family (see Ratnasambhava). He is sometimes equated with the Hindu deity Kubera. Jambhala is also believed to be an emanation of Avalokitesvara or Chenrezig, the Bodhisattva of Compassion. There are five different wealth Jambhalas; each has his own practice and mantra to help eliminate poverty and create financial stability.

❤ VAJRASATTVA -his name translates to Diamond Being or Thunderbolt Being. The vajra is an iconic marker for Esoteric Buddhism.
Vajrasattva is an important figure in the tantric Buddhism of the Newa: Vajracaryas of the Kathmandu Valley. He represents the ideal guru, and he is frequently invoked in the guru maṇḍala, the foundational ritual for all other Newa: Buddhist rituals and the daily puja for Newa: priests.

❤ TARA or SHAYAMA TARA — also known as Jetsun Dolma (Tibetan language: rje btsun sgrol ma) in Tibetan Buddhism, is an important figure in Buddhism. She appears as a female bodhisattva in Mahayana Buddhism, and as a female Buddha in Vajrayana Buddhism. She is known as the “mother of liberation”, and represents the virtues of success in work and achievements.
Tara is a meditation deity worshiped by practitioners of the Tibetan branch of Vajrayana Buddhism to develop certain inner qualities and to understand outer, inner and secret teachings such as compassion, loving-kindness, and shunyata (emptiness). Tara may more properly be understood as different aspects of the same quality, as bodhisattvas are often considered metaphors for Buddhist virtues.

❤ The Five DHYANI Buddhas, or Great Buddhas of Wisdom, are a central feature of Tibetan Buddhist belief and art. They are often found in Tibetan mandalas and thangkas. Each Buddha is believed to be capable of overcoming a particular evil with a particular good, and each has a complete system of iconographic symbolism.