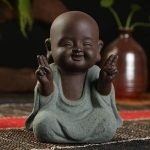 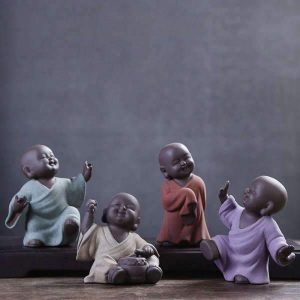 Caricature statue featuring adorable little Buddhist monks. Cute and spiritual they will be perfect for your home.

Buddha’s quote : “An upright posture and a few relaxed breaths: that can make a big difference. “

Is your goal to bring peace to your home or to reveal your worship? Then what are you waiting for to buy our Buddhist Monk Buddha Statue

It is a fact , the sculptures of Buddha are highlighted in the world of interior design . Buddhist art is taking root in our living rooms and becoming a trend in its own right.

Acquire a figurine of a Chinese Buddha head in the traditional gold color style or a sculpture of the seated Buddha Shakyamuni meditation on a lotus flower shaped by hand in solid wood, the possibilities are unlimited to create a Zen atmosphere, tranquil and Feng Shui!

By acquiring our Buddhist Monk Statue, you support fair trade and support to the conservation of ancestral Buddhist know-how! We only work with experienced and recognized sculptors to attest to the quality of our Buddha statues.

The contentment of our customers is our aspiration, we have selected Buddhist manufacturers throughout Asia, including Tibetan, Thai, Indian or even Chinese and a Japanese to offer this Buddha Statue Buddhist Monk .

There are a large number of different postures and Buddhas in Buddhism and they all have their history. We preferred to highlight the most symbolic gestures and mudra present in Buddhist temples in Tibet, China, Thai or Bali.

In the West, the most notorious Buddha statue is the Laughing Buddha and his huge belly but our function is also to show you the Buddhist culture in its entirety .

In addition to Buddha Statue Buddhist Monk , so we also market Buddha decorations with the effigy of the greatest personalities of Buddhism such as Bodhisattva Guan Yin or Avalokiteshvara but also Gautama Buddha or Nirvana Buddha who attained enlightenment, the great Buddha Amitabha, Maitreya or the most popular decoration object, the Buddhist monk.

Having a Buddha Statue Buddhist Monk , is to build a lucky altar, is to have a Zen decoration.

Beyond beliefs, to own a Buddha statuette, no matter the positions, small ornamental Buddha or a Zen Buddha in the vegetation of a Zen garden is to like to have an interior decoration filled with zenitude!