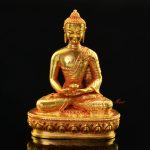 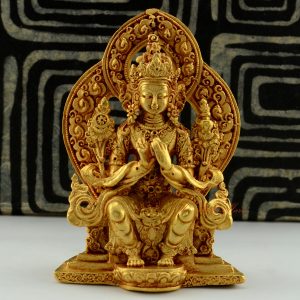 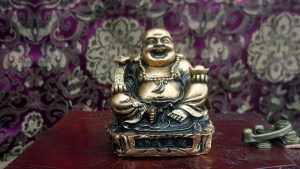 Insurance: Insurance is included in the shipping cost.

Amitabha – The Buddha of Infinite Light

According to the Larger Sutra of Immeasurable Life, the magnificence of Amitabha surpasses that of all other great beings, thus he is known as the Buddha of all the Buddhas. Buddha Shakyamuni once said of Amitabha, “The majestic glory of his light could not be exhaustively described if I praised it continuously, day and night, for the period of one kalpa.”
Amitabha dwells in a pure celestial realm, created via the power of his infinite merit accumulated over countless lifetimes as a Bodhisattva. His light shines brilliantly from this celestial realm, pervading the entire universe. According to the Sutra, if sentient beings encounter his light, their defilements are removed; if they see his light, they are relieved and freed from affliction. At the end of their lives, beings who have faith in Amitabha reach emancipation, as he gives them rebirth in his Pure Land. And as Shakyamuni explains, “Sentient beings who are born in that Buddha-land all reside among those assured of nirvana.”

Amitabha is depicted in Dhyana Mudra, the gesture of meditation, with both palms face up and lying in his lap. His right hand, resting on top, symbolizes the state of enlightenment, while his left hand, resting below, represents the world of appearance. Thus, Amitabha’s posture expresses his mastery over the world of appearance through enlightenment, and signifies the enlightened state of mind for which samsara and nirvana are one. In some representations, he holds the traditional begging bowl of an ordained Buddhist monk. The bowl is filled with amrita, the elixir of awakening and immortality, and symbolizes Amitabha’s infinite openness and receptivity toward all sentient beings.

This Statue is made from copper alloy with fully gold plating and Antiquated is made by machine.