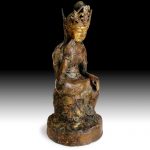 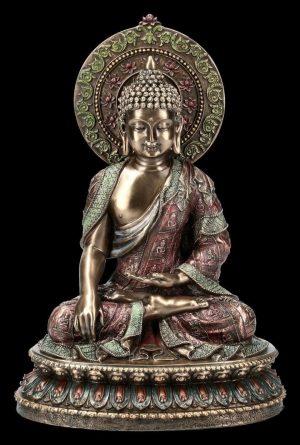 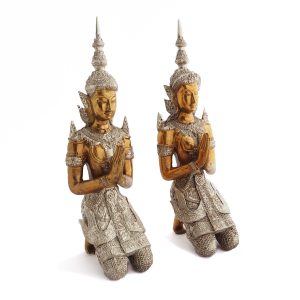 Maitreya, the Future Buddha, whose name in Sanskrit means “Loving Kindness.” Along with Gautama Buddha, he was the most celebrated figure of Gandhara art in the first century. Depiction in a half-lotus seated “Hokan Miroku” posture (宝冠彌勒). The Golden Crown Maitreya wears an arrayed patulous five leaves floral headdress with a tiny Amitabha Buddha in the center. It’s a distinctive style that initially appeared in the Chinese Northern Qi 北齊 period (560-577 A.D.) Followed by stylistic refinement seen in the Maitreya Bosatsu in the 7th century Yachuji (野中寺) of Osaka, Japan.

This discernably unusual bronze Maitreya was cast in one piece. It has an excavated long-buried appearance, with aged gilt flaked off in random patterns, leaving a mottled shading of old lacquer with patches of gold highlights. While some surfaces appear burnished from handling, the superb gilding on the face of Maitreya remains well preserved. The statue is conservatively dated for the Kamakura period (1192-1333), towards the brief renaissance when the reconstruction of the Kofukuji temple initiated a flood of creation for Buddhist art. Without a Thermoluminescence test, this rare pensive Maitreya will be sold as a 19th-century bronze or earlier.

*Authenticity Guaranteed. BuddhaMuseum specializes in temples and family worshipped Buddhist arts. We guarantee that all artifacts are genuine as described. It is our policy never to list fakes as genuine deliberately.